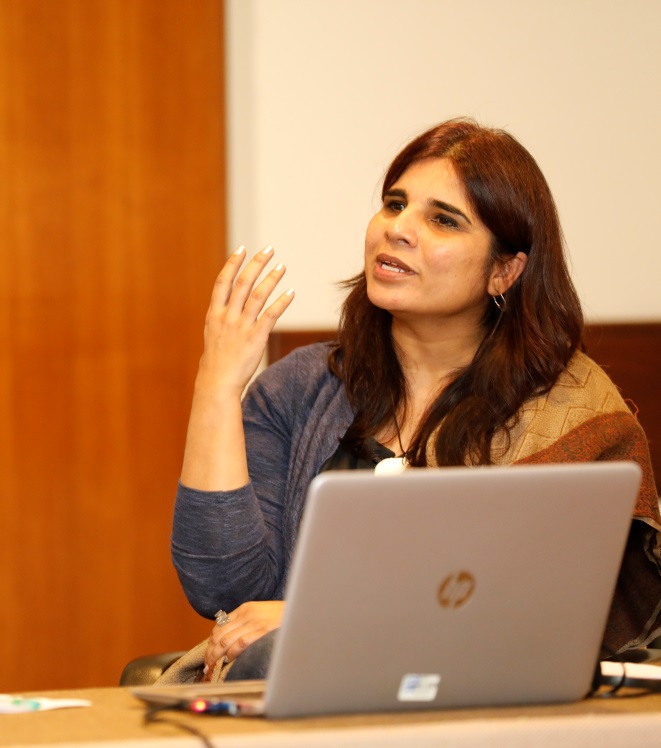 I can identify two factors in my intellectual and personal trajectory that have motivated me to become an academic, with a research focus on women in Pakistan.

First, is a sense of the power of language in shaping reality and the significance of the written word. Studying in public sector institutions in Pakistan, I witnessed changes in the world view presented in our curriculum, as the government changed. Language shaped reality as heroes turned into villains and vice versa.

Second, is openness to alternative points of view. Upon the completion of my Masters in International Relations from Pakistan, I proceeded to join a research institute. The move from an under funded public sector educational system to an alternative think tank was a turning point. From being taught the importance of nuclear weapons in Pakistan I was talking and working with peace activists who looked at life very differently. I remember one seminar in particular, where a peace activist, asked us, the audience, to raise their hands to show how many of us had been educated in the public sector and then remarked at how our presence was proof of the power of truth against the greatest indoctrination.

Subsequently, I got married, moved to Canada and began my MA in Philosophy. Personally, this was a challenging time since motherhood and the completion of my degree happened side by side. Working part time and studying while undergoing my first pregnancy seemed daunting at the time but the process eventually instilled a self assurance I have carried with me to this day. After the completion of my Philosophy MA, I decided to devote my time to motherhood, however my marriage fell apart and I lost two primary figures in my life within a span of one year: my father to a brain tumor and my husband to a divorce. Upon moving back to Pakistan, I began working full time, and raising my toddlers, all the while also experiencing structural obstacles we had in Pakistan’s social and legal system, towards divorce.  One of the places I found solace in at this time was – to my surprise, Urdu popular magazines, written by and for women, commonly called digests.

Digest reading is usually positioned as buying into retrogressive, socially constituted norms of being a “good” Eastern/Pakistani woman. So, like many other digest readers, I shared my interest with few people and positioned it as an activity that was pleasurable but contradictory to values I held as a feminist. These stories were mostly about everyday domesticity and the ordinary. There were no grand ideas behind them, and I often didn’t agree with the ending. Yet, despite this, there was a sense of belonging through a shared experiential knowledge of the everyday, inner dialogues and familiar geography depicted in these stories.

Given the context I worked in (the gender unit of a nonprofit), during the day I dealt with facts about violence against women, power dynamics, and lack of access to resources, and in the evening, I found a degree of closure by accompanying a fictional character on her journey to a destination that provided validation in one way or another.

In particular,  I began to notice voices of dissent in these commercial magazines. My first academic writing on this subject was a talking back. As stated earlier, most if not all scholarly work in Pakistan seemed to characterize women’s digests as frivolous fiction that often eroded notions of much-needed women’s agency. Thus, in talking back the effort was to bring forth voices of dissent in this genre that raised important questions with regard to issues such as domestic violence and financial independence.

Gradually, I moved towards pedagogy and had the opportunity to teach at both private and public sector institutions, before joining one as full time faculty. I then applied to PhD Anthropology program in the US.  As I held the acceptance letter in my hand and applied for an extended study leave at the university,  I felt I was well prepared for the next step of working towards a PhD. Or so I thought.

Moving to a new country where I had never lived before, as a single parent with two children aged 10 and 8, along with working and studying required a new set of skills. Initially, there were often times when daily existence felt like a blur of juggling balls, and trying to focus on academic writing like pushing a boulder. However, advice from a friend; (‘think of it like going down a beautiful stream and only focus on thoughts that float your boat, if the thought is hurting you, don’t dwell on it, disengage) helped change my perspective.

Three daily habits also helped: meditation every morning; staying completely away from social media; and ‘switching off’ at the end of the day. My mornings began early, around four or so, knowing that I would not turn on my laptop after 5 pm, no matter how urgent it felt, helped me focus, work and write, during that early morning time while my children were asleep. So, once I came back home I became ‘Amma’ and the graduate student named Kiran disappeared.

This ‘switching off’ actually seemed to enrich my life. As a graduate student, I began to thrive and was the first in my cohort to complete my PhD. My ethnographic dissertation (now being published as a book by Oxford University Press titled Stories with Oil Stains: A Tale of Women ‘Digest’ Writers) traced the specific forms attachment, articulation and agency take in the lives of women whose stories resonate with many, but who also face the critique of not being authentic writers. Coming back to Pakistan I rejoined a public sector university and am currently heading Gender Studies. Finally, my greatest achievement has been learning how you approach something emotionally (the story you tell about it to yourself and others) is important and impacts whatever you are engaged in, whether it’s academic writing or raising children.